I am so addicted to my new toy – a Rico round weaving loom, that I bought from Hobbycraft. The instructions for setting up the loom were somewhat lacking, but I’ve done a bit of weaving before and was more or less familiar with what I needed to do to get started, but not on a circular loom. I looked online for some guidance and found a brilliant weaving blog, which really helped.

When you’re warping a circular loom, the centre of it looks quite messy where all of the threads are crossing each other. I did attempt to rectify this with one of the tips on the website, but I’ve since found some other suggestions which I think would have made it even neater. Next time. I also learned (on my third attempt) about what makes a good warp thread.

I bought the loom because I thought it would be a great way for using up those odd scraps of yarn, which are a bit too long to throw away, but not quite long enough for a project. I decided that for my first attempt I would make a placemat.

I found the first few rounds quite tricky to weave, so I did them quite loosely in the middle of the loom before moving them into place. It got easier after a few rows, but then the weft started to feel loose however tightly I pulled it. I’m not sure if this was because I wasn’t compressing the rounds enough, or if I just needed thicker yarn, or because of the spaces between the warp increasing the further you move away from the centre. I suspect it’s the latter, but the other two things might help to correct it next time. I carried on until I was close to the edge of the loom, then cut and tied the warp threads. It was quite curved, but I managed to steam it flat, but it didn’t look as good as when it was on the loom. I wish I’d taken a picture of it then.

I really wasn’t happy with it, so I cut the knotted warp threads and removed the loose rounds. I’ve ended up with a coaster, rather than a placemat, but I’m much happier with it. I can’t wait to get started on another project to see if I can correct the issues that I encountered this time. 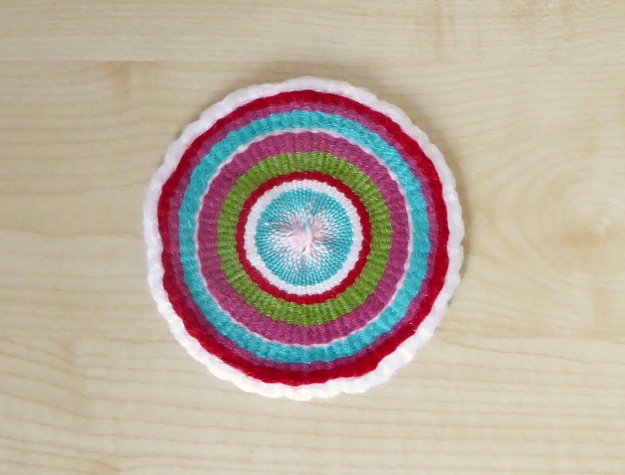 If you’ve worked on a circular loom and have any solutions for keeping a tight weave for a larger circle, I’d love to hear from you.

Finished! A bird's eye view of an allotment. Pattern by Collette Kinley.
A splash of colour for a gloomy Monday
If you need a bit of colour injected into your life, I recommend a visit to the Fashion and Textile Museum to see the Kaffe Fassett exhibition - The Power of Pattern.
I love Harrods' Christian Dior gingerbread-themed windows
Some weekends are just a little bit more magical than others
A new autumn wreath, made out of plants from my garden